Julia, Luther and Family about 1930 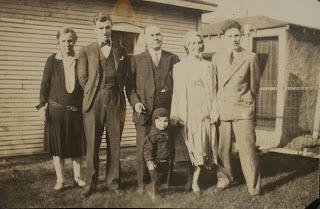 A copy of a family photo about 1930
Julia, Charles (Chess), Luther, Louise, Samuel and young Charles in front 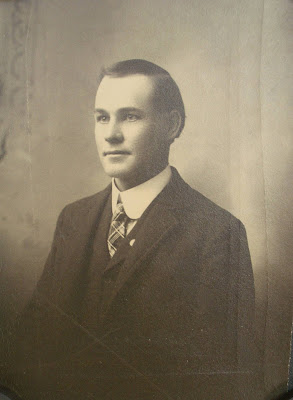 I have now completed the biography for Albert Rodman Kemps who was born in Oakdale, Illinois in 1870. Also included is his wife, Clara Mae Rountree Kemps. I also added a link to Albert on seven other pages. This is the last of the Washington County, Illinois biographies. It also completes all of the Kemps and McClurken biographies that will be posted.
Posted by rwkemps at 6:15 PM No comments:

I have now posted the biography for Elizabeth Smith McClurken who arrived in South Carolina, at the age of 5, in 1772. I also updated four other files to provide a link to this biography. I plan to search for additional information in the South Carolina Archives.
Posted by rwkemps at 9:57 PM No comments:

I updated the biography for James Kemps to include: the date of his second marriage, the "History of Oakdale Township" reference, and the possibility that he and Isabella were Covenanters.
Posted by rwkemps at 9:33 AM 1 comment:

I followed a link to the Illinois State Archives and ended up at a higher level that showed more collections. I went to the marriage section and very quickly found the dates for eleven McClurken or McClurkin marriages in my Family Tree Maker file. This also identified two spouses and the last name of a third. These archives did not include all the McClurken marriages. A few, that are on file in Washington County, were not in these archives. However, I will be revisiting the Illinois State Archives to see what other information I can locate.
Posted by rwkemps at 4:10 PM No comments: 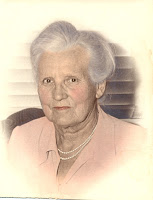 A first draft for the Julia Ryan Kemps biography has now been published. In addition, six other pages were updated to create a link to this biography. I will now be soliciting additions and corrections from other relatives.
Posted by rwkemps at 12:26 PM No comments: 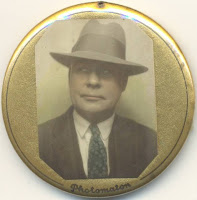 A first draft for the Luther James Kemps biography has now been published. In addition, seven other pages were updated to create a link to this biography. I will now be soliciting additions and corrections from other relatives.
Posted by rwkemps at 1:39 PM No comments:

I have now posted the biography for Thomas McClurken who arrived in South Carolina in 1772. I have labelled it preliminary because I plan to acquire additional documents to supplement the story of his life. As I mentioned in an earlier post, another researcher has provided me with some information. Included was the knowledge about a wonderful resource related to South Carolina, the South Carolina Archives. It is from these archives that I plan to acquire additional documents and try and resolve some other relationship issues. I am also looking to acquire documents from Washington County, Illinois. I do not expect an update to this biography for several months.
Posted by rwkemps at 4:04 PM No comments:

In an attempt to verify the dates of a couple of marriages, I ordered documents from the Washington County Clerk. A copy of the pages from the Marriage Books were received and have been added as references to the biographies of Samuel Henry Kemps, Clara Amanda McClurken Kemps, James H McClurken and Elizabeth Olivia Kemps McClurken. Additionally, the Death Certificate of James H McClurken was added to his biography.
Posted by rwkemps at 3:03 PM No comments:

I have now included the references from the History of Oakdale Township in the biographies of Samuel Henry Kemps, Clara Amanda McClurken Kemps, Andrew Todd McClurken and William Henry Kemps. In adding the Civil War information for Andrew, I attempted to verify the data from other sources. I was able to verify that Andrew was in the Civil War but in a different Company and Regiment. The Illinois Civil War database provided additional personal information about Andrew and caused me to realize that I had an incorrect birth year (that had come from different sources). This caused me to go back and fix four related biographies. You do the best you can with the sources that you have but expect to find some conflicts.
Posted by rwkemps at 9:57 AM No comments:

Sharing with other researchers

When I submitted the Sarah Rodman Hood McClurken story to the Genealogy Trails website, the webmaster advised me of a related entry for this individual. This provided me with new ancestor information for Sarah. I sent an email of thanks to the author and also pointed out a small error. The author expressed her thanks and sent me some additional information and requested my help in error checking. This provided me with new facts related to the marriages of four of Sarah's daughters. I found a couple of minor errors in the others persons data, however, I was also able to provide her with data the she was missing. This simple act of sharing rewarded both of us. I have updated five of my "biographies" and the ancesor tree diagram to reflect the new information. Now I need to send a note of thanks to another individual whose data was helpful to me.
Posted by rwkemps at 7:39 AM No comments:

I have just completed the updates for these two individuals and removed "preliminary" from their biographies. The updates include the references from "History of Oakdale Township" and also includes their land purchase records. They are available at: James McClurken and Sarah Rodman Hood McClurken .
Posted by rwkemps at 5:44 PM No comments:

My Oakdale, Illinois page was fairly minimal. I decided that I needed to add some references to the old trails that passed through the area. I also added links to various maps of the area. The update can be viewed at: http://roger.x10host.com/Oakdale.html
Posted by rwkemps at 1:29 PM No comments:

In reading the "History of Oakdale Township," it became apparent that being Covenanters was important to the story of the McClurken's. My original reference was inadequate. Therefore, I spent quite a bit of time researching Covenanters. Then I compiled a more extensive summary of the aspects of Covenanters that shaped the lives of the McClurken's. The update is available at: http://roger.x10host.com/Covenanters.html
Posted by rwkemps at 2:02 PM 1 comment:

Tracking down a book

When I spoke to my father's cousin, Richard Kirkpatrick, back in 1987, he told me about a book about Oakdale that he had gotten a year earlier. Almost twenty one years later, in May of 2008, I began trying to locate a copy. I got a good tip from the Genealogy Trails website and followed it up with the Washington County Library. They had a copy and it was not copyrighted. They made me a photocopy and I scanned it and put it on my website. The "History of Oakdale Township" provided a lot of good information related to my family history. Now I need to rewrite some of my stories to include the information from that book.
Posted by rwkemps at 8:39 PM 1 comment:

With what I had found on Ancestry.com, I was able to write the story of my wife's maternal grandfather. Then I started the William Henry Kemps story. I sent it to Bill and other family members as final. Then the updates came back and I sent out another final. This happened a few more times and finally settled down. About November 2007, I signed up for another year of Ancestry.com. I did a lot of searching and finally documented the Patrick and Louisa Ryan story. In May of 2008, I happened upon a good website resource for my family; Illinois Genealogy Trails for Washington County at: http://genealogytrails.com/ill/washington/ I was going to send my stories there so they could be posted. Then I realized that I had some out of state stories so I created my own website: http://roger.x10host.com as a place to put them all. This is working very well, considering how often I am making updates at this point in time. The Genealogy Trails website points to mine so the stories are shared through that site. So far, I have about 10 stories posted.
Posted by rwkemps at 6:07 PM No comments:

In 2005, my cousin Marlene sent me a letter and wondered if I had any updates to my 1987 research. She was especially interested in my great grandparents, Patrick and Louisa Ryan. I wrote a short summary for what I knew about each individual. Then I wrote the story of my father's life and sent it to my brother for input. Since I had the paid research on my great great grandfather, James Kemps, I wrote that narrative next. I took an on-line genealogy course provided by the maker of my notebook computer. Then, I found a good deal on Family Tree Maker 2005, so I upgraded. It came with a free one-year subscription to Ancestry.com. To get the most out of my free year, I began to search for everyone on both sides of my tree and both sides of my wife's tree. I printed and downloaded as much as I could find. After a couple of months, I upgraded the subscription and searched more. I used their OneWorldTree and found information about the McClurken's, that other researcher had provided. Then I cancelled the upgrade but it turns out that it also cancels the rest of your free year. I complained to no avail. My local library provides home access to Heritage Quest but it does not provide everyname look-up and seems incomplete. I used it for quite a while with limited results. I also made several trips to the library and used Ancestry.com. My interst waned with the effort.
Posted by rwkemps at 11:26 AM 1 comment:

Kemps Dairy Products are sold in the Chicagoland Area and people would frequently ask me if I was related. My grandfather's brother, William Henry Kemps, had started the company but I did not know much about him. In 2002, his grandson Bill Kemps was planning a trip to Chicago and we planned to meet. I inquired about William Henry and Bill provided his recollections in a series of emails. Bill's cousin, Wayne, generously sent me a CD of pictures related to William Henry's life.
Posted by rwkemps at 11:08 AM No comments:

In late 1993, I started again. I looked up my father's cousin, Worth Kemps, and wrote him a letter. He and his family were the only other persons named Kemps that were clearly related to me. He called me on his 80th birthday and I taped the conversation. He sent me his family information and I sent him a copy of all my research. I continue to exchange Christmas Cards and family updates with his wife and one son.

In 1999, I bought a copy of Family Tree Maker. I proceeded to load it up with all the information that I had collected. I also went to Rosehill Cemetery and found my grandfather's grave.
Posted by rwkemps at 10:07 AM No comments:

Searching for my ancestors

This is the story of my journey into the past, my family history. It began on a family trip to Galena, Illinois about 35 years ago. I asked my mother and father about their parents and grandparents and wrote it all down. An uncle, Athur Andersen, had documented the birthdates of the members of my mother's family. This was the start.

My father died in 1984 and my mother died in 1985. I felt cut off from my past so I started my search.. I ordered death certificates and wrote to the Oakdale Cemetery for burial information. I paid a genealogist in Philadelphia $40 to find out more. And I ordered a book that was advertised to be a history of the Kemps Family. It was fairly useless and provided a list of many people named Kemps who were not related. I contacted my father's cousin, Richard Kirkpatrick, and I wrote to the Kemps Dairy. I sent copies of all of my research to my brother and my cousin Charles.
Posted by rwkemps at 6:44 PM No comments:

Labels: The start of my journey
Newer Posts Home
Subscribe to: Posts (Atom)